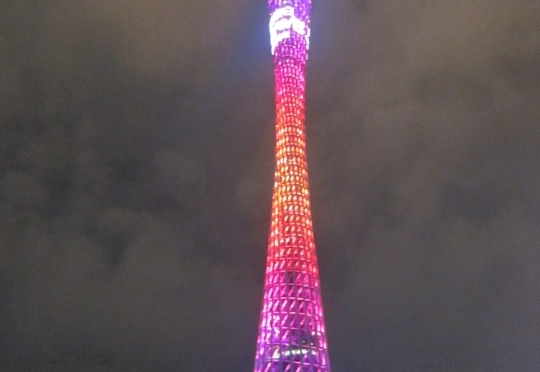 Guangzhou also known as Canton as part of the Pearl River Delta served as a major terminus of the maritime Silk Road, a major port and transportation hub in mainland China. It is the third largest Chinese city in China, behind Beijing and Shanghai with an estimated population of 13 million people in 2014, and become one of the most populous metropolitan cities in China.

Guangzhou Baiyun International Airport (Airport Code: CAN) is the city’s main airport that is located in the northern part of the city. Upon arrival, passengers can take Guangzhou Metro, Line 3 into the city center.

If you traveling from Hong Kong just like I did, you will need to exit from the airport terminal and walk to Terminal 2’s Coach Terminal to take a bus or minivan to Guangzhou. The buses or MPVs will take you through Shenzhen Bay for custom checking before boarding the mainland bus into Guangzhou. Tickets can be purchased at the airport terminal and the journey takes approximately 2 hours, depending on traffic condition.

There are also bullet trains traveling from major cities around China. The train will normally arrive at Guangzhou South. You can take the local metro line to your accommodation.

The city has an efficient transport network system, from subways (MTR), taxis, buses and trams. Guangzhou Metro and Zhujiang APM are one of the easiest and affordable ways to travel within the city and Foshan, its neighboring city through Guangfo line. Passengers can purchase their tickets using the ticket machines.

Upon exiting the station, there are signboards showing which exit to take and most tourist spots are just within short walking distances. Ticket machines and signboards are available in English and Mandarin, making it very easy to search for your destination.

If you are traveling from Hong Kong just like how I’ did, you will need to exit from the airport terminal and walk to Terminal 2 to take a bus or minivan to Guangzhou (See below for further details). There are also trains from the city which travel directly to Guangzhou South (click here).

Things to do for 3 Days in Guangzhou

The first visit of the day was the iconic Canton Tower (广州塔), known as Guangzhou Tower. The tower is located in Haizhu District of the south bank of the Pearl River. It is the tallest TV tower in China and the fifth tallest freestanding structure in the world. From the top, visitors can enjoy a birds-eye view of Guangzhou.

Getting There: Take the subway Line 3, get off at Canton Tower Station, Exit A.

Next to the tower is Zhujiang New Town (珠江新城) which was planned as the city’s purpose-built CBD for the 21st century. Standing on both sides are two super tall twin towers named International Financial Centre and Chow Tai Fook Centre, a combination of the mall, office building, hotel, conference center and observatory deck (see featured picture above).

At the south side lies the four cultural venues named Guangzhou Opera House, the Second Children’s Palace, the Guangzhou Library, and Guang Museum. There is an underground shopping mall, vehicular tunnels and automated people mover (APM) within the New Town.

Getting There: Take the subway Line 3 or Line 5 to Zhujiang New Town station

Dr. Sun Yat-Sen Memorial Auditorium was built to honor the great forerunner of the Chinese revolution Dr. Sun Yat-Sen. The building was designed by Chinese architect Mr. Lu Yen-Chih (1894-1929) and built by Guangzhou locals and ex-pats. It stands on the former site of the Presidential Palace.

Constructed between 1928 and 1931, the auditorium is combined with Chinese and Western architectural design and characteristics. An octagonal-shaped main structure comprise a steel frame enclosed with reinforced concrete, covering 12,000 m² of the complex’s total 62,000 m². The roof is upturned-eaved on four sides and tiled in a sapphire blue glaze. What makes this structure so special is that it was built without the need for a single central pillar with a span of 71 meters at its widest point and a height of 52 meters.

The auditorium now serves as a national cultural relic, providing a leading location for conventions, performances and tourism.

Yuexiu Park (越秀公园) is a largest park in downtown of Guangzhou and is worth exploring the surrounding which has three artificial lakes and seven hills. With an area of 860,000 square meters, there is the famous stone sculpture of Five Goats Rams, Zhenhai Tower (see below), Square Cannon Site, the site of the Ming Dynasty City Wall, and an amusement park.

The statue is located in the park’s Wuyang Hill. According to local myth, it is said that once upon a time there are five fairies riding on five goats. They flew to Guangzhou and brought five bunches of corn to the villagers and bless them with everlasting fertility. They soon vanished into the sky, leaving the five heavenly goats and later turning into stone. That is why Guangzhou is also called “Goat City” or “Corn City”.

Don’t miss out Zhenhai Tower (五层楼) which is located inside Yuexiu Park, meaning the ‘Sea Guard Tower’. This 28 meters high, 31 meters wide, and 16 meters depth tower was first built in 1380, at the beginning of the Ming dynasty but was destroyed and restored five times. It was rebuilt from a wooden structure into reinforced concrete in 1928. The reddish-brown bricks and grey tiles made the building primitive simple and unique.

The museum exhibits nearly thousands of pictures, collections displaying the culture, customs, and city development, historic relics from different dynasties, and modern Chinese cultural relics since the Opium War. There is also an art gallery and special showroom on the east side of the tower and cannons display on the barbette and 23 ancient stone tablets on the west side.

Getting There: Take the subway Line 2 to Yuexiu Park station Exit B1 and walk along Yuexiu North Rd to get to the park and memorial hall

Guangxiao Temple is one of the hidden gems and is pretty easy to miss and hard to find without a little help from the locals. This temple is one of the most influential temples in China with a history dating back more than 1,700 years. The temple was built during the Western Han Dynasty (207 BC- 24 AD) as a private house and a lecture hall. It was later dedicated completely to the function of a Zen Buddhist Temple during the Southern Song Dynasty. Many monks had lived there and greatly spread their culture.

Getting There: Take subway Line 1 to Ximenkou station Exit C, walk along Guangxiao Road for several minutes to reach there

Be amazed by the Temple of Six Banyan Tree

Within a short walking distance is Temple of Six Banyan Tree (Liu Rong Temple, 六榕寺) that was built in AD 537 during the Song Dynasty. It was firstly constructed by the monk Tanyu under the order of Emperor Wu to keep the relics of Cambodian Buddhist saints. It has a 1,000-year pagoda, green ancient banyan trees, the sound of brooks, and the songs of birds.

Daxiong Baodian Hall located west of the temple has one of the three biggest ancient copper Buddhist statues in Guangdong. Each of them stands for the present, past, and future. The temple also kept some artistic treasures such as the tablets by Wang Bo and the bronze statue of Hui Neng.

Getting There: Take the subway Line 1 or Line 2 to Gongyuanqian station Exit B. Walk along Liurong Road to reach there.

After completing a day trip in Foshan [i],  I was craving for food and head down to Shangxiajiu Pedestrian Street ( 上下九步行街). It is located in Liwan district, the first business street that opened in 1995 and architectural characteristics were influenced by both Chinese and European styles. It stretches from Shangjiu Lu (上九路) in the east to Dishifu Lu (第十甫路) at the west.

The street is about 1.2 km long with over 300 shops. Boahua Road is filled with restaurants offering traditional Chinese dishes to international cuisines as well as fast food chains. This is where I had my dinner before going to the main pedestrian street to shop for some souvenirs. This place mainly sells clothes, sportswear, garments, and electronic accessories.

Getting There: Take subway Line 1 to Changshou station to get to Baohua Road or subway Line 6 to Culture Park station and head north about 200 meters to Shangxiajiu Square

The last thing to do was get on an hour cruise ride along Pearl River and enjoy the spectacular night view of the city. I saw some cruises that come with buffet dinner onboard too. The ride passed through Haiyin Bridge to Huacheng Square and Canton Tower, where the buildings’ lights are lighted up.

Getting Elsewhere in China?

If you are planning to stay longer to explore and learn the history of China, you can check out some of my other posts:

Hi! I'm Jack, the voice behind Endless Travel Journey I am an avid traveler who loves to backpack and always in search of new exciting adventures. I love to travel around the world and share the amazing stories and experiences of my wanderlust trip. So, sit back and enjoy reading my wonderful journey.

Hey there fellow readers! Be sure to subscribe to get the latest AWESOME travel newsletter.

HOME & AWAY FOR ADVENTURE