Feel like traveling back in time as I visit this former Siamese capital built in the 1600s that attracts me with its impressive works of art and many ancient ruins.  It was once ruled by 33 kings and several dynasties during that period for 417 years, until it was invaded by the Burmese in 1767, ruined and abandoned. It was declared as a UNESCO World Heritage Site in 1991 with its recognition of its historical and cultural importance.

Going on a Budget Trip at Ayutthaya

Waking up early in the morning at 5 a.m. and take MRT line from my place to Hua Lamphong station near Bangkok’s Chinatown. The MRT line is just 15 minutes walk to Bangkok Railway Station. So, I bought a 7 o’clock train ticket on a non-air-conditioner hard seat with fan. It costs only 20 baht and takes this exciting ride to Ayutthaya.

However, there was a delay for 40 minutes, not sure was due to raining or late departure of other trains at the station. While waiting for the train to leave the station, food and drink sellers got the train to sell snacks to passengers, Some of them even follow us on board and hop off a few station ahead after done selling their food. 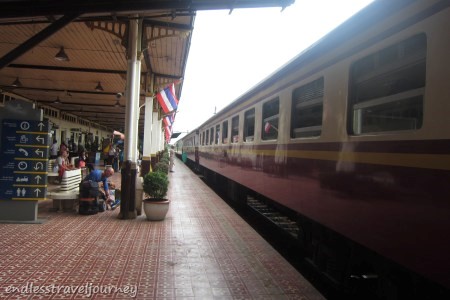 After taking 2 hours on this 76 km journey, I have arrived at Ayutthaya and saw many tuk-tuk drivers waiting for tourists to give a tour for 1,200 baht. But I had to decline their offer and choose to go for an adventurous bicycle tour. I rented a trek bike for just 100 baht (50 baht for normal bicycle/ 150 baht for motorbike per day) and the store is located just right across the train station. They will give a tourist map, bicycle helmet and bike lock.

Using the map as my guide, my first visit of the day is Wat Maha That. This temple of Great Relic is located in the central part of Ayutthaya. Based on the Royal Chronicles of Ayutthaya, the construction of the Main Pagoda began by King Borommaracha I in 1374 and completed and completed in King Ramesuan’s reign.

It was set on fire during the Burmese invasion in 1767. The abandoned pagoda fell into decay during the ruling of King Rama VI and remain the symmetrical base with staircase. One of the most popular photographed sites is the Buddha’s Head in Tree Roots. It fell off from the main body onto the ground and gradually trapped into the roots of a constantly growing Bodhi tree. 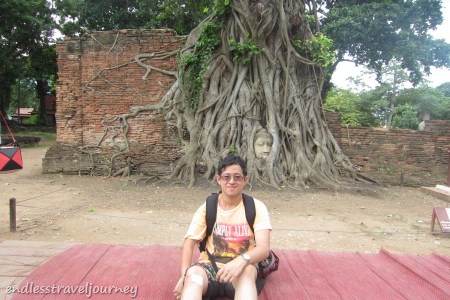 Right next to Wat Mahathat is Wat Ratchaburana and was built under the ruling of King Borommaracha II (King Sam Praya) in 1424. This was the place that the bodies of his two brothers, Chao Ai Phraya and Chao Yee Phraya were cremated. The brothers fought to their deaths over the throne after the passing of their father.

The prang’s crypt with faded frescoes is accessible by steep stairs. The treasures and precious artifacts were stolen but later the thieves were caught and some of them were recovered. 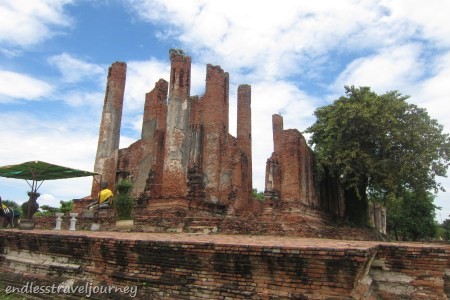 While heading along the rest of famous landmarks in town, I took a detour to visit Wat Thanmikarat at U-Thong Road. This temple was built before the time of Ayutthaya and had a large nine-room vihan, the ‘Harn Song Dhanma’ built for listening to the sermon on Buddhist Sabbaths. It once housed a bronze Buddha head dating back U-Thong period but now kept at Chao Sam Phraya Museum. Admission fee is 20 baht.

Located near this temple is the big Wat Phra Mongkhon Bophit. Unfortunately, it was closed for renovation and can only see its picture and display the Buddha at its entrance during my visit.

Cycle west of the island to visit Wat Lokkayasutha as it is well known for the biggest reclining Buddha in Ayutthaya. This white Buddha has the length of 42 meters and the height of 8 meters. It still remains in perfect condition with its glowing face beaming with happiness and the head is supported by a lotus base platform.

As for the last attraction of the day, I made it to Wat Phra Ram that is situated outside the Ancient Palace and next to the pond. The soil under the pond has been dug out to build the foundation grade of the temple. Phra Ramesuan ordered to build this temple in 1369 at his father’s cremation site but fully completed during the ruling of King Borommaracha I (Phra Chao U-thong). So, the temple was named after the king.

After taking this 6-hours self-guided bicycle tour, it’s time to get back to Bangkok city. Once arrived at the train station, I got a 4 p.m. ticket and reach Hua Lamphong station at 6.30 p.m., just the right time for dinner This concluded the day trip to Ayutthaya and is truly an amazing travel experience. And most of all, I can finally cross it off from my bucket list.

How Much Spend on Ayutthaya Trip?

Total amount used on the trip is 651 baht (USD $20) which I find it simply affordable.