Bangkok known as “City of Angels”  is a vibrant and urban city filled with delicious street food, modern skylines. amazing shopping  and countless number of temples and historic sites. A network of rivers are connected to the long Chao Phraya river where the “wats”, shopping malls and luxury hotels are situated.

Wat Arun, known as The Temple of Dawn dates back to Ayutthaya period and was enlarged by King Rama II and King Rama III and later renovated during the ruling of King Rama IV. It has a 79 meter tall, massive central pagoda, “Phra Prang” and surrounded by four smaller ones at each corner.

Due to its name, the best time to take the photos is during sunset in the red sky behind the temple. Unfortunately, the weather was very cloudy during my visit, but yet glad I made it here. 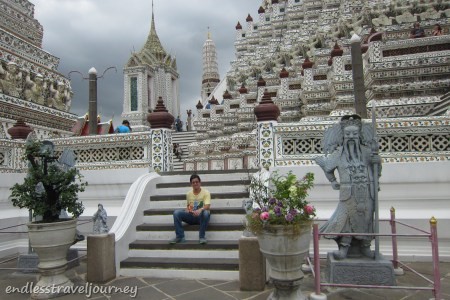 Wat Arun is easily reachable using Chao Phraya Tourist boat from Central Pier by taking BTS to Saphan Taksin Station. The pier is just a short walk from the station. If you are in Tha Tian Pier near the Grand Palace, just hop on the boat from its pier to get across to this temple.

Heading toward the most famous Khao San Road by night where backpackers love to chill, stay at these affordable hostels. You can scroll through this area for street food and enjoy a great shopping experience that sell cheap jeans, shoes and accessories. You can have pad thai and spring rolls for just 90 baht! That’s how cheap you can get right here.

Time to start my full-day city tour as I explore this magnificent Grand Palace and Wat Phra Kaeo (The Temple of the Emerald Buddha). The place is extremely crowded with tourists and the security here are very tight. Visitors need to pass through metal detectors and security check before entering the palace.

The Grand Palace complex is consists of the royal residence and throne halls, as well as the number of government officers. It serves as the King’s residence and the site of administrative offices.

While on my way walking to the Grand Palace, I saw many Thai people still come here to mourn, wearing clothes in black and pay their last respect to their late King Bhumibol Adulyadej. The country has a year-long mourning period since the late King passed away on 13 October 2016. 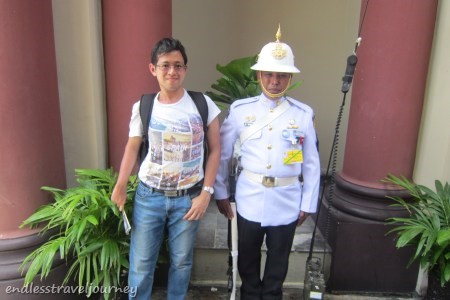 While planning to go to Sanam Luang, I was curious that the surrounding was fenced up and closed. One of the friendly Thai Tourist Police explained to me that the public square will be used as the cremation ground and will only be open to the public after the cremation ceremonies.

This textiles museum is located right next to the entrance of the Grand Palace. It keeps H.M. Queen Sirikit’s personal collection of dresses designed and tailored from Thai textiles by local and international designers. The exhibitions tell the story of how H.M. Queen Sikirit has helped turn Thai silk from a local handicraft into the symbol of the country through her Support Foundation founded in 1976.

Wat Traimitr known as Temple of the Golden Buddha displays the extraordinary 700-year-old seated golden Buddha image. This figure composed five and a half tons entirely of gold. The temple is located at the end of Chinatown’s Yaowarat Road.

Wat Benchamabophit (The Marble Temple) was built during the reign of King Chulalongkorn (1868- 1910) with some European influences seen in its stained glass windows and the use of Carrara marble. Dozens of bronze Buddha images are displayed inside the temple. 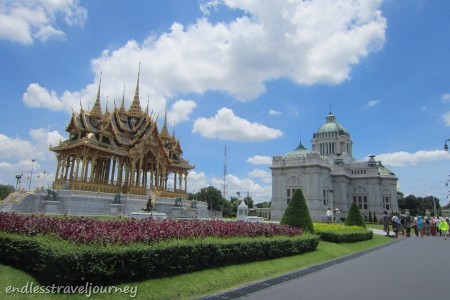 This hall mainly used to hold important royal and state ceremonies. The security level here is also very high. For some security reasons, cameras and mobile phones are not allowed inside and kept in lock boxes, means no photography allowed inside the premise.

Wat Ratchanatdaram (Loha Prasat) was built during the reign of King Rama III and contains a pyramid-shaped Loha Prasat inspired by the one in Sri Lanka. It stands at 36 meters high with 37 surrounding spires, the only one of its kind remaining in the world. 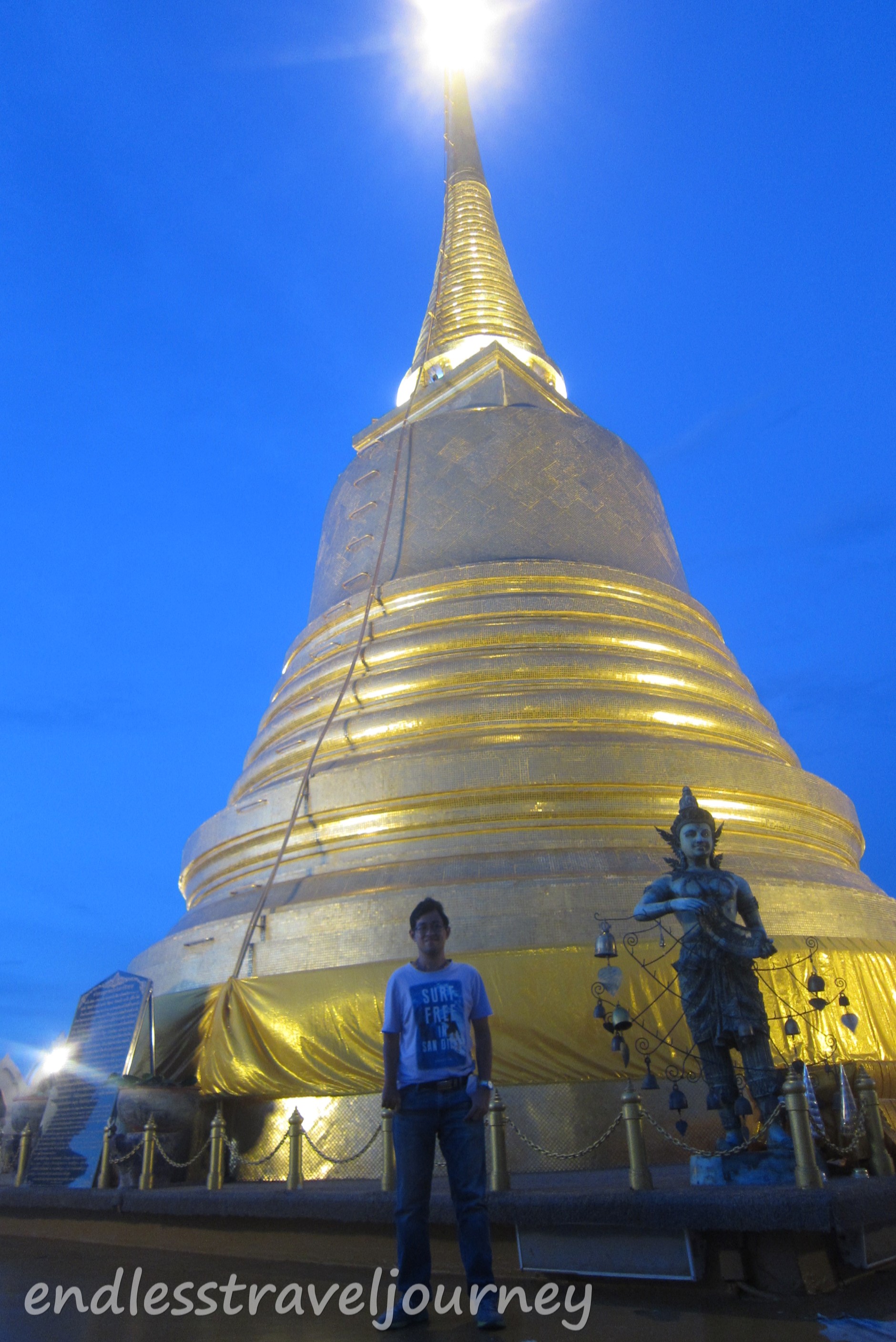 Climbing 318 steps up to Wat Saket (The Golden Mount) that houses a 58-meter high stupa placed on top of a golden cupola. The relic of the Lord Buddha is enshrined here. The cupola is entirely covered with small golden squares and is reflect the sun which gives the building its name.

Spending the next two hours until evening to enjoy the best view Bangkok has to offer. I can see the entire city up here including the Giant Swing, the Grand Palace, Wat Pho and MahaNakhon Tower. Waiting here for the sunset and able to see the palace and its surroundings lighted up by night is truly marvelous. 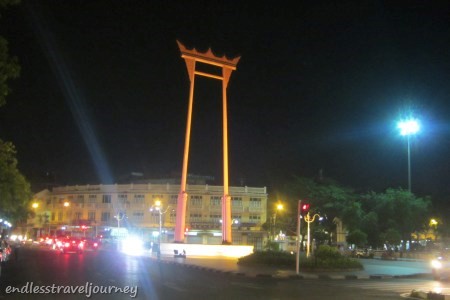 Just a 15-minutes walking distance is the 200-year-old Giant Swing, once used in Brahmanic ceremonies to honor the highest God Shiva. It was also used in a contest to seek the brave man who could swing the highest to seize a money bag from this 25-meter high pole. However, this contest was discontinued many years back due to many accidents and deaths occurred.

Walk down another famous Ratchada Night Market. Unlikely any night markets in Bangkok, Ratchada has its street stalls and food stalls surrounded with pubs and restaurants. There is a pub where many big motorcycle gang love to hang out.  This market has plenty of accessories shops, but they sell similar things with other stalls around such as electronic gadgets, clothing and toys, but not many souvenir and gift shops here. 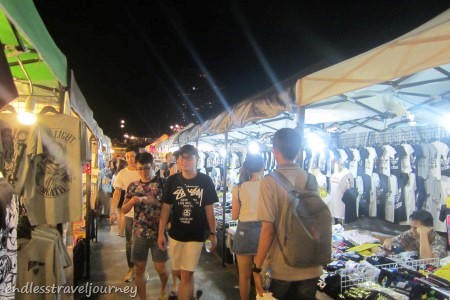 12) Hop on a Motorboat Taxi

Experience a different mode of transportation by hopping on the khlong, a motorboat taxi which the locals commute on their daily life in the city. It is the cheapest way to travel and the journey from Asoke- Patchaburi to Pratunam (five-stops) only cost 10 baht.

Take the BTS to the most popular Chatuchak Weekend Market. Anything that I looking for or see, they can be found here. In the end, have tasted some of their delicious snacks and dessert and also bought some dried fruits, sweets, some souvenirs and a singlet with ‘Chang’ beer logo on it. This market is so huge that probably needs half-day to explore them all. 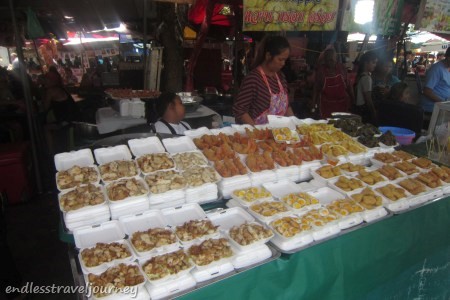 Another recommended night market is Patpong Night Market at Silom. It is an open-air market that sell similar stuff as Khao San Road.  There are many bars and nightclubs in the next streets. However, need to be cautious at all times where there are many strippers and drunk people wandering around the street.

Getting Around in Bangkok

The best part is Bangkok offers various type of transportations. You can get most everywhere, save time, money and avoid the crazy traffic by using public transports like BTS [i], MRT [ii], motorcycle taxi, public buses, Chao Phraya Express [iii] and Khlong express boat [iv], It makes my trip perfectly easy and hassle-free.

Hi! I'm Jack, the voice behind Endless Travel Journey I am a wanderer who loves to backpack and always in search of new exciting adventures. I love to travel around the world and share the amazing stories and experiences of my wanderlust trip. So, sit back and enjoy reading my wonderful journey. View all posts by Jack Lim

Hi! I'm Jack, the voice behind Endless Travel Journey I am a wanderer who loves to backpack and always in search of new exciting adventures. I love to travel around the world and share the amazing stories and experiences of my wanderlust trip. So, sit back and enjoy reading my wonderful journey.

Tales and tips from a nomadic traveler