This is the first time and first day going on a solo trip in Europe. I had a long hours of sleep after a long haul flight and now finally now well rested. It is the summer season here and weather forecast for this couple of days is cloudy.

The great news is the daylight during the summer season will be longer than winter time. That means the sunrise will be around 5 a.m. and sunset is expected to be at 10 p.m. So, it gives me the advantage to visit more places after shopping malls, museums and churches are closed in the evening.

Getting There and Around

Just for quick information if you are wandering how to get to Belfast, the option is by plane to Belfast International Airport (BFS). Most common budget airline Ryanair and Easyjet will fly here from different parts of United Kingdom.

Another way to get there like what I did was by AirCoach bus from Dublin International Airport (DUB) or Dublin city. The journey from Dublin takes just two hours and cost £10 per way (click here for more details).

To kick start the day, I visit the Queen’s University. It was founded in 1810, one of the top 10 oldest universities in the United Kingdom and the oldest in Northern Ireland. Some of the buildings here more than 100-years old and some were used only for certain occasions.  It is also a convocation happening today as students and their family gathered happily to take photos and touring around the campus. 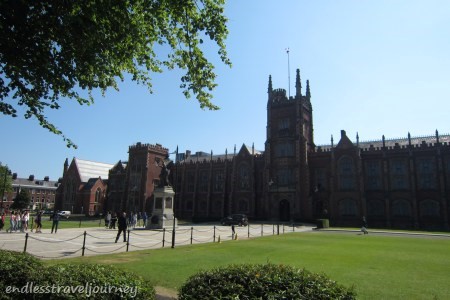 Behind the campus is the Botanic Gardens, a great place to chill and relax, covered with many tall trees. Many families love to have a picnic and enjoy their weekends here. The Palm House is located in the garden and is one of the oldest surviving curvilinear iron and glass structure here. It was designed by Charles Lanyon with a dome and two wings which houses various exotic plant collection.

My next stop is St George’s Market, a famous weekend market in East Bridge St. There is a train station nearby named Botanic station and just need to get off at the next stop at Central station. One stop may seem close, but the walking distance from the campus to the market will take up to 30 minutes. It is fastest and only takes 10 minutes walk from Central station to the market. 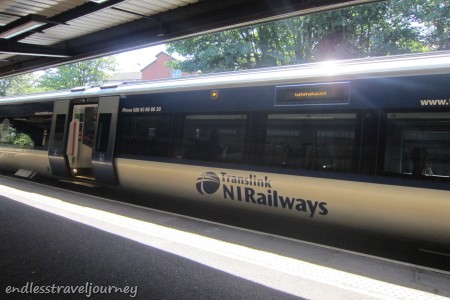 St George’s Market was opened in June 1890 and was used for selling butter, eggs and poultry. But today, this renovated building is filled with food vendors, antique stalls, art displays and gifts stalls. Other functions such as fashion shows, boxing tournaments, motorcycle events, performances and other exhibitions were held too. It opens only on Fridays and weekends.

The Mexican Classic Cuban had tempted me to have for lunch- a slow roasted pork, ham, pickled gherkins and Swiss cheese with yellow mustard wrapped with Cuban crusty bread. So delicious. It was great enjoying my meal while watching the lovely lady and the band performing live at the crowd. 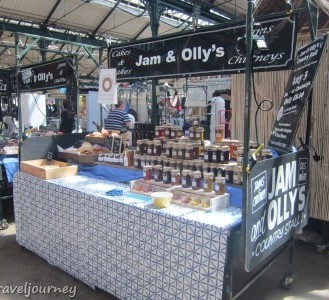 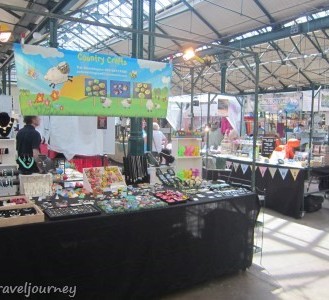 And almost forget to mention, there is a hamburger stall where they come out with some fancy names for their burgers: ”The Titanic Burger’ and ‘The Game of Thrones Burger’. The burgers were named after the popular HBO TV series which had the show filmed in many parts of Irish island and the birthplace of Titanic ship. Ireland had become so popular over the years because many locations and landmarks were used to film movies, TV shows and music videos. 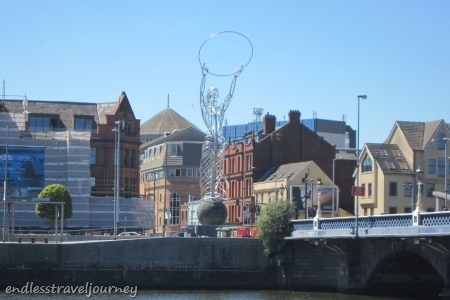 After spending 2-hours in the lively market, I carry on by taking a brisk walk along River Lagan. Looking just opposite the river is the 5-star Hilton Hotel and Belfast Waterfront that built right in front of the riverside. Not far from here are the cranes belongs to Harland and Wolff, a shipyard company just right next to Titanic Museum. Thus, this shows me that I am heading in the right direction to the museum.

The building behind me is the well-known Titanic Museum at Queen’s Island. It is situated in Titanic Quarter with the Thompson Dry Dock and Pump House, Titanic Slipways, Titanic Exhibition Centre and SS Nomadic. 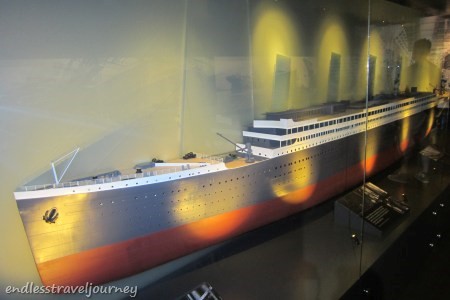 This state-of-the-art building gives you an insight on the history of Titanic: the story of how she was built, its launch of the ship into the ocean and the events of this sinking ship. The museum also exhibits a small version of Titanic replica, the models of one, second and third-class room for its guests, the establishment of H&W, the history of Belfast city and the lives of  Belfast dock workers. 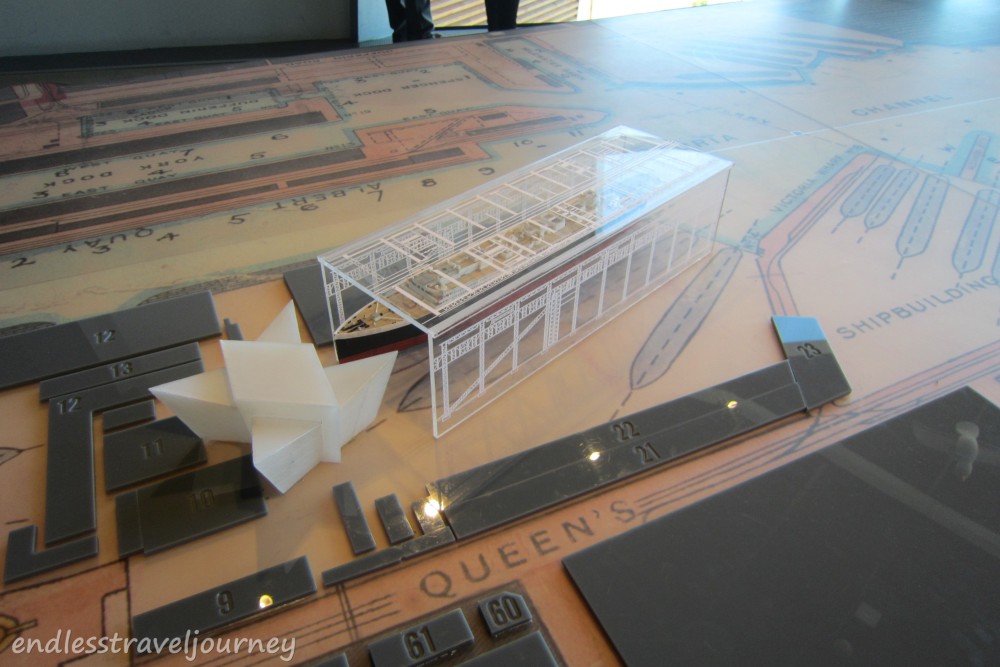 The top floor allows you can see the entire Titanic Quarter and can imagine the construction of Titanic taken place here in the past.

After exploring the Titanic Quarter for 2-hours, it’s time to walk back to the city centre to have a quick dinner. The locals, youngsters, adults and elderly alike sure know how to dress up and party hard along Waring St on the weekend. Plenty of Irish bars, pubs and restaurants can be found around this area. 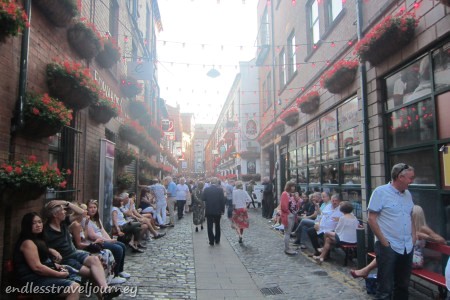 Most of the tourist attractions, shopping malls and other shop outlets are closed by 8 p.m. The least you can do right now is to take 20-minutes walk to the nearest attraction is Belfast City Hall. The plans for its construction started in 1888 when the city was awarded city status by Queen Victoria as recognition for its rapid expansion and prospering linen, rope-making, shipbuilding and engineering industries. The construction began from 1898 until 1906 and designed by architect Sir Alfred Brumwell Thomas.

Before finish up the trip of my day, I return back to River Lagan, not far from where I lived. It has a wonderful city view and enjoy the cool breeze along the river. It is past 9 p.m. but yet I still can see the sunlight, something different in my own country that will set by 7 o’clock. There is a huge fish statute called The Big Fish, the Salmon of Knowledge and Albert Memorial Clock built next to the river. 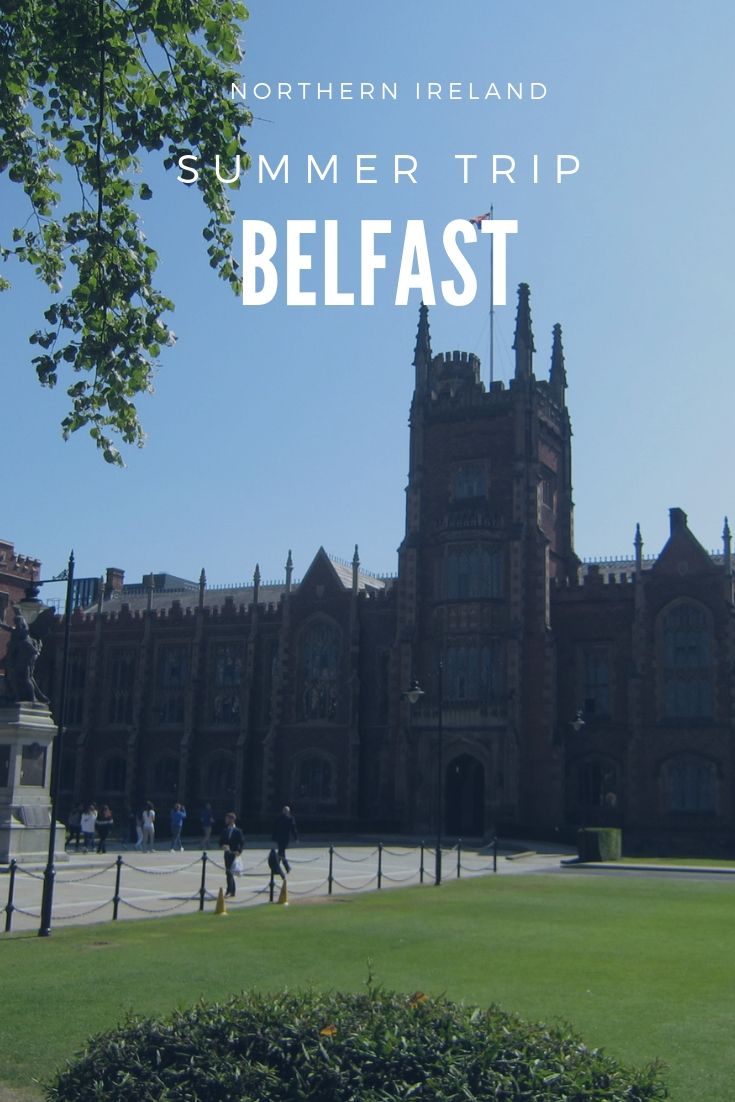